Kigelia Africana is a deciduous tree that originates in West Africa but is found all over sub-Saharan Africa, extending in range from Tanzania to South Africa. It can be found in open woodlands and along riverbanks, in high rainfall savannah areas, shrublands and rainforests. The name is derived from the Mozambican name for sausage tree, ‘kigeli-keia’.

Growing up to 25m in height, Kigelia Africana is remarkably fast-growing and can mature in 4 – 5 years. Sprays of deep red flowers appear from August to October and the tree fruits from December to June. The long and pendulous fruits can grow up to 50cm in length, weigh up 10 kg and resemble large sausages, hence the common English name of Sausage tree. It’s also known as the worsboom, kalabasboom, or komkommerboom in Afrikaans, and umfongothi (Zulu), muvevha (Venda), and mvunguti (Chichewa-Malawi).

The Sausage tree is one of the first to flower in the Kruger National Park in early spring. Many bird species and monkeys enjoy the abundant nectar, and duiker, kudu and impala feast on the fallen flowers. Many animals enjoy the fruits, including baboons, monkeys, bushpigs and porcupines, as well as elephants, giraffes and hippos.

Mature fruits can be found on the tree year round, and these are traditionally collected from the trees and used to produce a dried fruit pulp used in multiple applications. 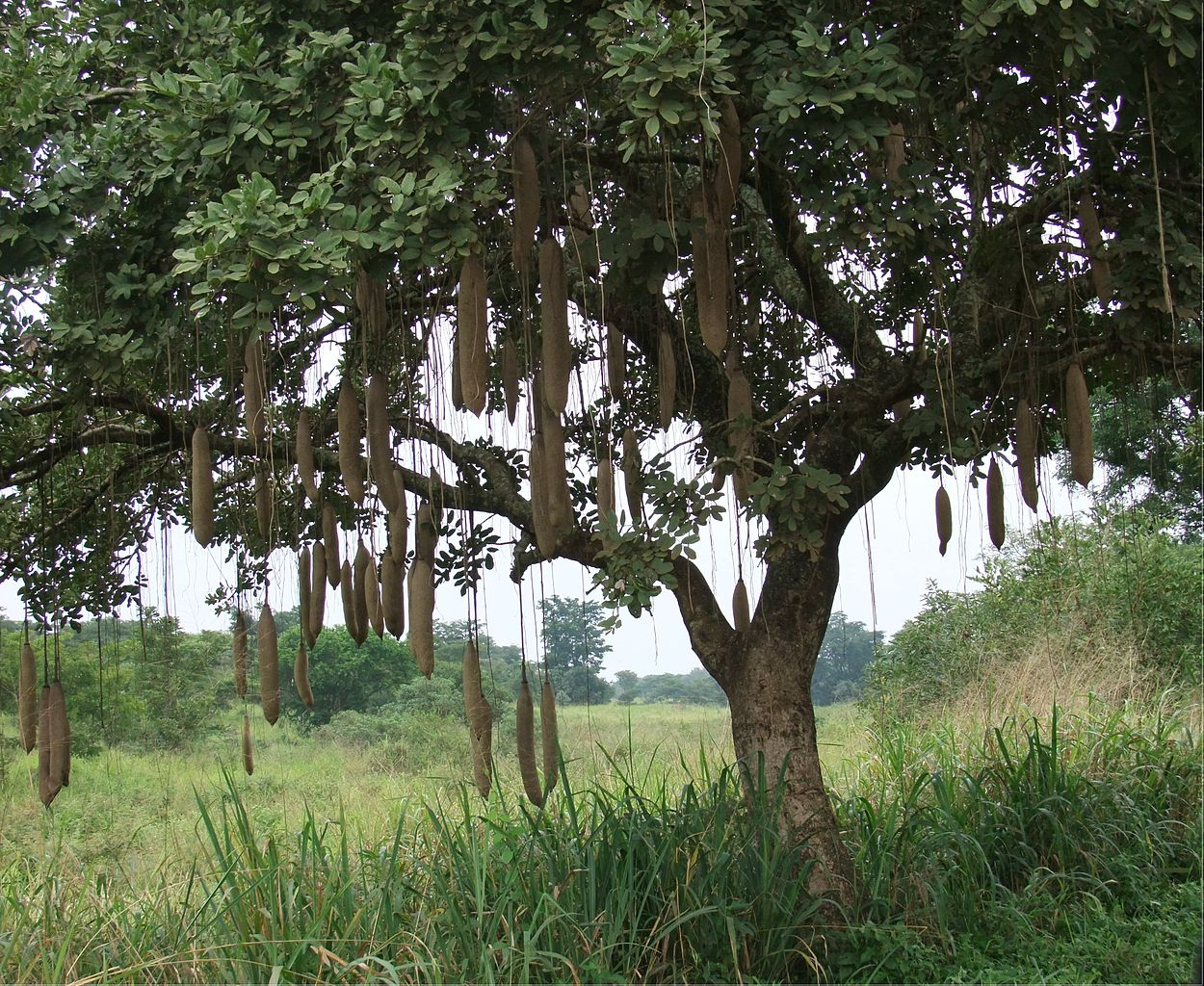 The tree has a long history of traditional and medicinal uses across Africa. In Malawi and Kenya, the roasted fruits are used in making traditional African beer – the fruit adds flavour to the beer and speeds up the fermentation process

The leaves have nutritional value for people and animals, containing minerals like calcium, magnesium, and iron. They’re used to feed livestock and in the wild elephants and kudu will feed on them. All parts of the tree (fruits, leaves, bark and roots) are used by traditional healers across Africa to treat various health conditions. These traditional medicinal uses have been extensively documented by ethnobotanists.

The use of Kigelia Africana in traditional skin preparations is well documented. Crude creams made with Kigelia fruit extract are used to treat solar keratosis (a pre-cursor to skin cancer) and malignant melanoma. Tonga women of the Zambezi valley make a facial treatment of the dried fruit to keep skin smooth. The plant is also claimed to have potent wound healing activity – the leaves, seeds and fruit pulp are dried, powdered and made into a poultice which is applied to treat wounds, ulcers, sores, syphilis and rheumatism.

An infusion is made from the ground bark and fruits is used to treat stomach problems and pneumonia.

The seeds of ripe fruits are energy rich and are roasted and consumed in times of scarcity, and the seed oil has potential to be an important nutritional resource, as it is rich in oleic acid and essential fatty acids. 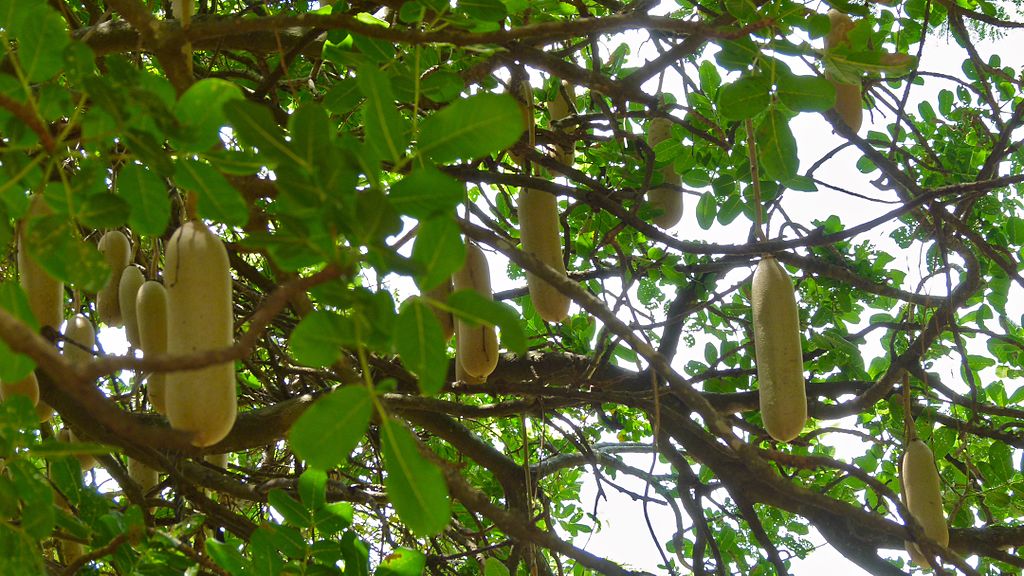 The fruit is reported to be a strong purgative and poisonous if eaten when unripe. The fruit can also cause blistering of the tongue and skin.

When planting in the garden, care should be taken with positioning - the tree has an invasive root system, so it should be kept well clear of buildings, paving, and swimming pools. Falling fruit can also severely damage a parked vehicle.

Polyphenols play an important role as antioxidants and scavengers of free radicals. They protect against skin damage caused by UV radiation and can inhibit some enzyme functions.

Pharmacological studies carried out on K. africana plant parts have been based on traditional uses and analgesic, anti-Inflammatory, antidiabetic, antimalarial, anticonvulsant and antidiarrheal properties have been identified. Fruits have received the most attention from researchers regarding their bioactivity. The fruit has anti-bacterial and anti-fungal properties and the bark has anti-inflammatory, analgesic, anti-microbial, hepatoprotective, and potential anti-cancer properties.

While scientists have conducted extensive research on traditional medicinal uses of Kigelia Africana, many of these have yet to be scientifically validated. The fruit is the most frequently used part of the plant used for traditional preparations, followed by the stem bark, roots and leaves.

Kigelia extract is used in cosmetic and pharmaceutical topical applications, particularly in the formulation of sun protection and skin firming lotions, to treat skin irritations and allergies such as eczema and psoriasis, and to treat inflammation. It also has an anti-aging and antioxidant benefit to the skin. The antioxidant activity of K. africana has been investigated by various researchers, and all plant parts have proven to have good antioxidant activity. Antioxidant compounds play an important role in scavenging for free radicals, providing protection against oxidative DNA damage.

The flowers are most scented at night to attract bats as pollinators.

In Botswana and Zimbabwe dugout canoes are made from the tree.

A bright yellow dye can be made from the roots and the boiled fruits produce a red dye.

All you need to know about Green Tea

Basix + and Basix XM before and after case studies